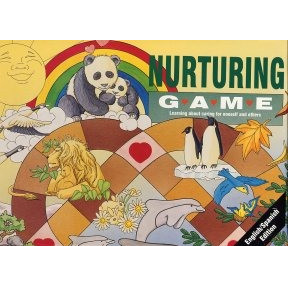 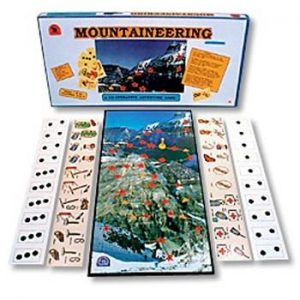 The Ungame: Non-competitive games, such as The Ungame, are designed specifically to foster communication. It is available as a board game, and as a separate card games for Kids, Teens, and Families.  The Ungame is ideal for a therapy session as the length of play can be predetermined at the start of the game. So, if there are only fifteen minutes left in the session the game can still be played and the session can still be quite productive.  In addition, playing the Ungame fosters skills such as sharing, interacting, and listening. 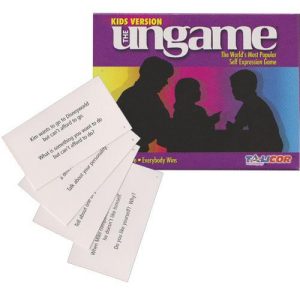 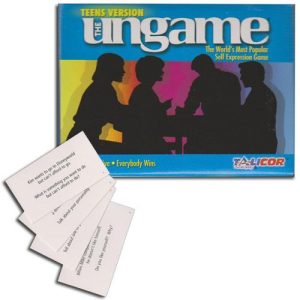 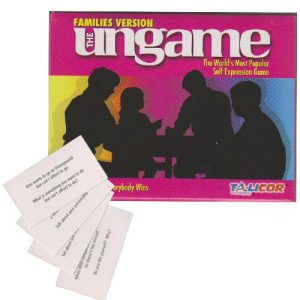 The Ungame board game includes two levels of “general cards,” a board, pawns, and a die. Level one cards tend to be light-hearted and non-threatening, and Level two cards tend to require more thought and self-revelation. Level 2 cards ask questions about feelings, values, and memories.  The Ungame card games also consist of level one and level two cards and may be used with the board game. Simply substitute the general cards that come with the game with one of the card decks. The card game includes Choice, Question and Comment cards, which are also spaces on the board game, so these cards should be removed when using them with the board game.

The Ungame is easy to play. Players take turns rolling the die, count spaces and then respond to the prompt on the space they land on. If they land on an Ungame space, they pick up a card, read it aloud, and respond. If they land on a Question space they may ask any player any question they like. If they land on a Comment space, they may make a comment about anything they like. As a therapist, I usually use the Question space to seek clarification about an earlier response or find out something about the child. Choice spaces allow the player to make a comment, ask a question, or pick up an Ungame card. Level 1 cards are typically non-threatening and ideal for building cohesion in a group and rapport between the players.  They facilitate discussion and learning how to express oneself. Level 2 cards tend to evoke more emotional and in-depth responses and are better used once clients have begun to feel comfortable.

Getting to Know You - Hide & Seek with Ungame cards – The therapist chooses which deck is going to be played with, and hands a portion of the 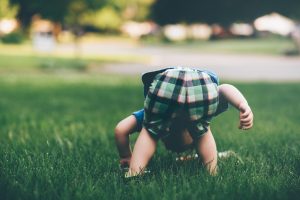 deck to the child. Better readers can be given more cards, weak or young readers, only a few cards. The therapist may choose to stack the deck prior to the session. The therapist chooses three cards he’d like the child to answer and the child chooses 3 cards they would like the therapist to answer. The child hides her cards first, then the therapist hides his cards. Child and therapist then take turns looking for the cards. When a card is located it is responded to.

Getting to Know You – Rock, Paper, Scissors, with or without Ungame cards – Follow the same procedure as above, but instead of choosing 3 cards, go through your stack and identify a few questions you’d like to ask. Next, play Rock, Paper, Scissors. Whoever wins the round, gets to pose the question. This game can also be played without cards. Participants simply ask whatever question they want of the other participant.

The Squiggle Game is a cooperative activity and was developed by D. W. Winnicott.  Winnicott was a pediatrician and a child analyst.  He developed to the Squiggle Game to be played in the initial interview with a child.  He developed this activity as a way for the therapist to make contact with the child.  He did not develop any fixed rules, as he wanted clinicians to feel free to adapt it to their style and enhance it a way that worked best for them. Clinician and child take turns making a squiggle, and then turning it into a picture of something. Child and counselor are free to complete as many, or as few, as they choose. Many variations of the Squiggle game have been developed over the years (as a Google search will reveal). One interesting discussion can be find in the following online article:

The Nurturing Game is another non-competitive game that not only fosters communication but also promotes activities that encourage nurturing behavior.  The Nurturing Game is suitable for adults and children ages 6 and older to increase self-awareness, communication skills, and appropriate use of personal power. Participants respond to questions regarding awareness of self, feelings, giving and receiving praise, as well as practicing appropriate touch. Each Nurturing Game contains cards and directions that are published both in English and Spanish. There are two “tracks” on the game, one for adults and one for children. In addition to responding to cards there are Praise (Sun) spaces and Hug (Heart) spaces. I recommend that male therapists use the heart spaces to give a high five, fist bump, or “say something positive” about one of the other players.

Mountaineering, There’s a Growly in the Garden, & Bambino Dino: These three cooperative games are published by Family Pastimes.  Family Pastime games have a specific goal that is achieved when participants play together, not against each other.

The most popular Family Pastimes game purchased by therapists is The Mountaineering Game.  Participants work together to reach the top of the mountain. For an added challenge, game participants can also try to work their way back to the base of the mountain.  The rules of the game compel the players to talk and work together. There is only one pawn which players take turns moving. There are two types of cards, mover cards and equipment cards. At the beginning of the game players must decide how to distribute the cards.  Neither player has enough mover cards nor equipment cards to get the pawn to the top of the mountain.  Since players take turns moving the pawn, each move affects what the other players can do.  As the pawn travels up the mountain it can become stuck and players must work together to move the pawn off various obstacles. This is a fun game to play with siblings and gives the therapist an opportunity to witness how they work together. Cooperation games can also be sent home for family members to play together during the week. Two very popular games for children ages 4 to 7 (and older depending on the child’s emotional maturity) are Bambino Dino and There’s a Growly in the Garden. In the first game, Bambino wanders into a valley to get food, just as water begins to rush in. Participants work together to save Bambino from the rushing water. Players take turns rolling the dice. The color on the top of the dice determine if the player will get a barrel to remove water, food for Bambino, or more water will be added to the valley. It helps if players work together, discussing which cards to use and when to remove water.  Players may also share barrels to remove the water. 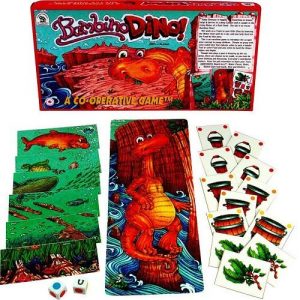 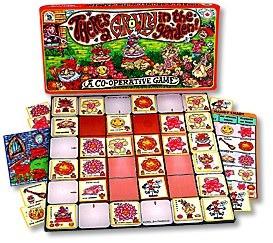 In There’s a Growly in the Garden participants work together to plant flowers, and then prevent the Growlys from pulling them up! The game starts with an empty garden. Players take turns adding Flowers, Scarecrows to block the Growlys, or Special Things that also block the Growlys.  Players need to watch out for Growlys, who turn up randomly, and pull up flowers if they’re not blocked by a Scarecrow or Special Thing.

Family Pastime publishes numerous games, these are just three examples. In addition, there are dozens of fun activities and games available from ChildTherapyToys.com. When using these games, it is advised that the therapist become thoroughly familiar with the rules and how to play before bringing it into the play room. The games are not complex but the rules are nearly impossible to figure out on the fly.